11 Nov This cooking class is changing one student’s outlook on school, work, and life

Posted at 13:40h in Uncategorized by Logan Okun
Share

This cooking class is changing one student’s outlook on school, work, and life 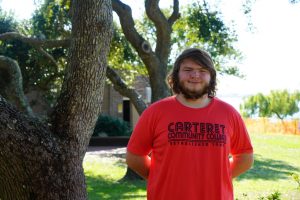 School was hard for Odin Bright. A junior at Croatan High School, Bright struggled with grades and a general disinterest in school. All of that changed when he started his food service technology (FST) classes at Carteret Community College this fall. Bright now looks forward to school, has improved his grades, secured a new part time-job, and has developed a better mindset when facing challenges.

“Exceptional Children: Our Vision and Commitment to You: to ensure every student is provided with an individualized set of supports and services to graduate and become successful adults engaged in the community.“

The exceptional children’s program has been around for more than a decade. The original work partnership was with the hospital in the county, but it has expanded to include numerous other organizations, including the FST program at Carteret Community College. Right now, the exceptional children’s program has 55 students enrolled ranging from freshman to seniors in high school. Bright is one of those students.

Skills for a lifetime

“Before I entered this program, I was having trouble. So I was looking for different options,” Bright said.

He asked one of his teachers about the food service technology program, hoping to learn more. Once he knew more, he eagerly enrolled. And although he just joined the program this fall, he is already reaping the benefits.

“It’s helped me significantly with my grades and at home. I’ve learned how to cook, before I didn’t know how to cook, or anything else. Now I can prepare big meals for my family,” Bright said.

Bright spends two hours at the college every Monday, Tuesday, Thursday, and Friday. In the afternoons, he’s back at Croatan High School for his other classes. 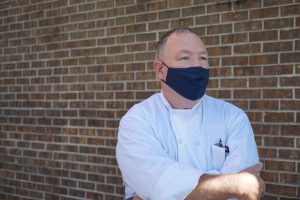 Randy Sweat is Bright’s instructor at the community college. He said he’s seen him gain confidence and skills in the kitchen with each passing class. This is Sweat’s first year as the FST instructor.

“I’m proud of Odin because in addition to taking the culinary class, he just recently got a new job at Dunkin Donuts. So he’s learning and being able to apply some of the stuff that he’s got here,” Sweat said.

Bright still has the rest of this year and next before he graduates, but he’s already thinking about what’s next.

Bright’s stepfather, pictured below, was in the Navy for 13 years. 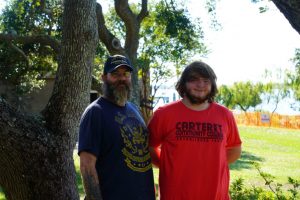 Odin Bright’s stepfather (left) stands next to him outside of Carteret Community College. Alli Lindenberg/EducationNC

The exceptional children’s program prides itself on helping students find competitive employment upon graduation. The occupational courses, like the FST program at Carteret, help broaden students’ eyes to available jobs and build necessary skills. In addition to these technical skills, the program focuses on soft skill development as well.

“One of the biggest areas they improve in is confidence,” said Martha Hooper, the work experience coordinator for the exceptional children’s program.

Bright echoed this sentiment in his comments. “When I was a dishwasher, I didn’t always have a good attitude. But ever since entering the program, it has impacted me while I’m at work and at home,” he said. “Before I was in the program, I was bored all the time and sometimes sad, but when I entered it, it brought a whole new meaning.”

Bright has his eyes set on his future goals, but for now, he is cooking away in the kitchen, perfecting recipes. His current favorite? Brussels sprouts with orange marmalade. He thinks everyone should give it a try.