Posted at 14:22h in News by Logan Okun
Share 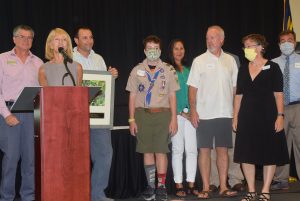 The Pelican Awards recognize individuals, businesses and government agencies that have shown exemplary coastal stewardship. In addition, Scout BSA member Ryan Mroch of Troop 446 was awarded a Junior Pelican Award for his leadership and volunteer efforts with the project.

In September 2018, Hurricane Florence significantly eroded the College’s shoreline, compromising an existing bulkhead and walkway on campus. Rather than simply fixing the bulkhead, the Carteret Community College looked to install 1,250 feet of living shoreline on campus after seeing the success of a living shoreline put in place more than a decade ago in front of the N.C. State Center for Marine Sciences and Technology.

“Our work on a living shoreline along the south side of campus represents a collaboration among many forward-thinking partners,” she said, adding a special thanks to Lexia Weaver of the federation for her wise guidance, Arendell Engineers and T.A. Loving for their expertise, care and quality work, and Eagle Scout Ryan Mroch and his family for organizing volunteer efforts to support the project.

Mancini added that they appreciate the support of the National Fish and Wildlife Federation, Golden LEAF Foundation, and the N.C Coastal Federation for making the work possible.

“College faculty and staff will watch the shoreline develop and know they played a part in making it a reality. The resiliency, habitat, and beauty created by all of these participants will have a positive, long-term impact on our campus and community,” she said.

Eagle Scout Mroch was presented with a Junior Pelican Award by the N.C. Coastal Federation. Mroch led volunteer efforts in the shoreline project as part of his Eagle Scout Project and Hornaday Award. Mroch gathered approximately 100 volunteers to relocate oysters from the section of the damaged shoreline along Carteret Community College’s coastline to prepare the coastline for construction.

The volunteers removed the oysters from the rocks and concrete, placed them in bags, and then relocated them to another part of the shoreline. After the construction was complete, Mroch and volunteers moved the oysters back to the newly constructed granite sills to create an oyster reef. Mroch also assisted in recruiting volunteers and leading them in the marsh grass plantings.

“We are so pleased that the Coastal Federation recognized Ryan for his efforts,” stated Mancini. “Ryan served as a beacon for us throughout the process with his curiosity, pursuit of his Eagle Scout rank and Hornaday Award. His efforts were valuable to this process.”