Posted at 09:26h in Student Profiles by Logan Okun
Share 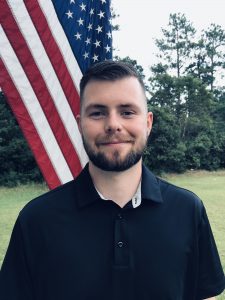 The decision to return to school was not taken lightly by Idaho native, Jesse Corbett. After serving in the National Guard and starting a family, Jesse knew he wanted to pursue a teaching career, but he was not sure where to start. Relocating to Morehead City, Jesse enrolled at Carteret Community College where he heard about the East Carolina University Pirate Promise program. In this program, students are guaranteed admission to ECU after successfully completing their first two-years with Carteret CC. With his goal to become a high school history teacher, Jesse knew this program was a way to make it a reality. “The Pirate Promise program expedited the process of getting into ECU,” said Jesse. “I was able to avoid a lot of extra paperwork and additional fees too.”

In order to complete his coursework at Carteret CC, Jesse took night classes while working full-time at Cherry Point as well as working in the construction field. “I had to work hard and stay focused,” he said. “I’ve had the idea of becoming a history teacher in my mind for a long time and now was the chance to make it happen.” Jesse would go on to successfully complete his Associate in Arts degree from Carteret CC, which included the prerequisites needed to transfer into the education field at ECU. Jesse was able to seamlessly transfer into the College of Education at ECU. At first, he was apprehensive about continuing on because he was under the impression, he would be one the oldest student in class. “I thought everyone would be younger than me,” said Jesse. “I quickly realized that going to school in your mid-twenties is totally normal. Just goes to show that you can start or return to your education at any age.”

Jesse is on track to graduate from ECU in May of 2021, with a Bachelor of Science in Secondary History Education, as well as a Bachelor of Art in History with a historical studies concentration. Just two years after transferring from Carteret Community College, he will be one of Carteret CC’s and ECU’s first students to graduate from the Pirate Promise program. Jesse is currently a full-time student teacher at East Carteret High School, which will be his final hurdle towards his goal of becoming a high school history teacher. “It has taken countless hours of hard work and many sleepless nights,” said Jesse. “But it has been worth every second of it.”